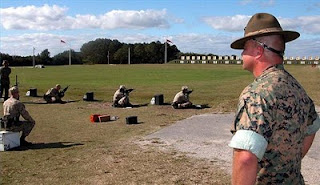 Hi everyone, I’m currently serving as a chaplain to FOCUS (Fellowship of Catholic University Students) Staff Training in Champaign Illinois. I wasn’t scheduled to preach at yesterday’s Mass for the 12th Sunday in Ordinary Time, but am on for several Masses this week, so I’ll share these as they’re possible

Thanks for reading – Fr. Jim

One of my best friends growing up entered the Marine Corps right out of High School. It wasn’t a shocker, every Halloween from Kindergarten through Middle School he was dressed as a Marine, not because he couldn’t afford another costume… that’s what he wanted to be.

Well when he got to Basic Training, he would write occasionally (the few times he had free time to do so). Basic Training wasn’t exactly what he thought it would be. The haircut, some physical training, shoot some guns – those were things he kind of expected (if he hadn’t he really would have miscalculated things). But in some of his letters he talked about some other type of preparation that he wasn’t expecting. Preparation that was, as he diplomatically put it – HARSH. Some of which he didn’t quite understand or didn’t even think made sense at the time. One time he wrote about how he had to stand in the middle of the night on some sort of guard duty, in the pouring rain, with his rifle and all his gear, in some type of “at attention” position, for hours as it continued to rain on him and not a soul around (or so he thought). Midway through the night, around 2 in the morning, he couldn’t stand standing anymore and gave into his exhaustion – thinking no one would know as he slightly leaned back on the wall he was near. He said all of a sudden his Sargent came out of nowhere, bawled him out, woke his whole company up and made them all do pushups in the rain in the middle of the night… (and you thought summer training was hard)

At the time, my friend saw this as a mind game designed to “break him down.” It seemed incredibly harsh treatment for a somewhat minor infraction for what at the time seemed a ridiculous duty to stand in this attention position all night. But as he reflected on it years later – the harsh preparation was necessary. He realized that if he failed in a similar way while in combat – he would be dead, as would all his fellow Marines.

The Harsh training prepared him for battle to save lives.

That story came to mind in reading Jesus’ words in the Gospel: YOU HYPOCRITES – STOP JUDGING THAT YOU MAY NOT BE JUDGED… – it sounds harsh. In fact over 2,000 years later, just hearing this passage, some get so intimidated it immobilizes them from sharing, defending, bearing witness to God’s Truth – or even from confronting sinfulness in a world where sin is often times celebrated.

But is that the response Jesus is looking for? It doesn’t seem so when we realize that after His Resurrection, he will command his Apostles to forgive sins in his name, and tell them to judge: whose sins you forgive are forgiven them; whose sins you retain are retained (John 20:30).

I think we find in tonight’s Gospel Jesus putting his disciples through a type of Boot Camp… In becoming a disciple, they’re going to be given a precious gift, not simply for themselves to enjoy – they are going to be entrusted with God’s Word and told to share this Good News of Great Joy to all the world. Yes that word will be comforting to people but sometimes that Good News, that Word of God will be calling people to conversion which is hard, and can be very difficult for people to hear. So they, and those of us who are disciples today, need to know how to share this precious gift in a loving way.

So Jesus puts them and us through some tough training and reminds us before we go off and take His Word and focus on how someone is “missing the mark” with that splinter in their eyes, to look at those wooden beams in our eyes.

And that’s not to beat up on ourselves and say “see how awful YOU ARE – HOW DARE YOU SAY ANYTHING TO THEM…” But rather, it is when our sin is ever before us, so is the realization of how desperately we have needed and continue to need God’s Mercy is ever before us as well. And when we live with that awareness, a genuine, authentic joy naturally arises knowing how fortunate we have been to experience the Saving Love of Christ ourselves. Then we are measuring with the measure of Loving Mercy which has been generously measured out to us.

Easier said then done, but who ever said boot camp was easy? Or for that matter, Who ever said being a disciple was easy? Because Jesus Loves us – as much as he loves all of God’s children – He asks us to engage in this, knowing we will look back and come to see the Harsh Training prepared us in the battle to help save souls…