Latest News
Home /Blog/BLIND UMPIRES, LOAVES AND FISHES AND THE BODY OF CHRIST 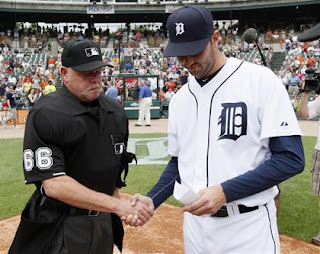 Hi everyone – here’s my homily for the Feast of Corpus Christi (The Body and Blood of Jesus Christ) Sunday, June 6, 2010. The readings for today’s Mass can be found at http://www.usccb.org/nab/060610.shtml . Thanks for reading and you feedback and comments. God Bless, Fr. Jim

What was that umpire blind?

That seemed to be the question that even non-baseball fans, non-sports fans asked – some with much more colorful language than that – after watching umpire Jim Joyce call a runner racing to first base who clearly was out, safe in Wednesday Night’s Detroit Tiger’s – Cleveland Indians game. Oh, yeah, there was one other detail that made this international news (when was the last time anyone cared about a Tigers- Indians game outside those two cities?) That botched call cost Detroit’s Tiger’s pitcher Armando Galarraga his place in Baseball history. Galarraga was one out away from pitching a Perfect Game – a true rarity in baseball where 27 batters face a pitcher, not one reaches first base – no hits, no walks, no batters being hit by a baseball. It’s incredibly rare for this to happen – since 1900 only 18 pitchers are believed to have achieved this milestone. (Just a side note, the Yankees have the most perfect games pitched among all baseball teams… )

Instantly, people went crazy when they saw the call. Tigers manager Jim Leyland argued, Galarraga had a look of disbelief. Even Michael Kay interrupted his coverage of the Yankee game to show this clip from Detroit and go crazy screaming how horrible the umpire’s call was, how many terrible calls the umpires have made so far this season.

Right after the game, the umpire, upon looking at the replay saw the mistake he had made and was clearly upset with his error. He admitted he botched the call, apologized for the mistake, hoped that it could be reversed and the “perfect game” be awarded to Galarraga (which the baseball commissioners office has said won’t happen)

After all this drama and interest, an interesting twist happened Thursday night. Umpire Joyce was scheduled to officiate behind Home Plate at the Tigers-Indians game. Even though he was offered the opportunity to take the night off after being the target of so much public ridicule (and on the very field he had made the wrong call in front of Detroit fans who had a whole night to re-watch the play over and over again) there he was to do his job. Usually before the game starts, the managers from both teams present the home plate umpire the lineup for the game. But instead of Manager Jim Leyland, Galarraga himself stepped up to the plate, handed the card to the umpire and shook Joyce’s hand. Visibly moved and appreciative, the umpire wiped away tears as the two men displayed a great deal of sportsmanship, understanding and class.

It’s so rare to see that isn’t it? We’re almost pre-conditioned to expect Galarraga to appear on Letterman with a top ten list mocking all umpires, While Joyce would be on Larry King or Charlie Rose trying to explain his version of the story, and every other baseball figure from former players, team owners, and sports writers showing up on every other talk show to give their opinion why one guy was right and the other one was wrong. We say that we miss good sportsmanship. We say we want people to be more understanding, more civilized, more respectful, more forgiving, more loving – and kind of look around wondering where that’s going to come from. We don’t know how our society has gotten like this – and we wonder, what or who will save us from it.

The disciples are faced with a similar situation in today’s Gospel. Jesus is speaking to crowds about the kingdom of God. There are thousands of people there, listening to what Jesus is preaching. And after a whole day of being together, the disciples realize they have a big problem. This big crowd is pretty hungry. No one made provisions, no one planned ahead, no one said to bring a boxed lunch. What or who will take care of this immediate, and important concern?

The disciples are practical “send them home.” Almost like they’re saying “Show’s over folks, thanks for coming, good luck and have a safe trip!” You have to love Jesus’ response to them though – “Give them some food yourselves.” Immediately they start arguing – “Jesus we got 5 loaves and 2 fishes – what good is that going to do?”

It’s not uncommon for us to hear this Gospel, hear of the feeding of the five thousand plus and think it’s a pretty cool feat that Jesus has done. Yet, what is at the heart of this miracle is when we notice that what makes the miracle possible, what is able to transform a bleak situation is when we give whatever it is we have and allow the Lord to do what he needs to do and wants to do for the world – through sometimes the simplest of means.

In the Gospel, 5 loaves and 2 fish turn out to be all that Jesus needs in order to feed a multitude in abundance.

In Detroit on a baseball field, the humility of two men – one admitting his error, one accepting the apology recognizing that as human beings we’re all prone to mistakes, – are able to transcend the rancor and feeding frenzy that so often is the norm in situations like that.

When we give what we have – we find that through Jesus Christ, it can be more than enough and yes – miracles can happen.

Today we celebrate the Feast of the Body and Blood of Jesus Christ. We as a Church meditate on how great our God is in coming to us, Jesus becomes really present in His Body and in His Blood under the appearances of Bread and Wine. The truth of the matter is there’s a part of us that finds all of this hard to believe. We know that’s what the Church teaches and we want to believe it, but in looking at so much that goes on in the world around us, what goes on in our own lives and families and workplaces – it’s hard to believe the Jesus is present – that the Eucharist we receive can transform us and draw us intimately closer to God. The voices of doubt, argues with that part that wants to believe He’s really real and really present saying things like “if you are here Lord than do something – Heal this pain. Bring peace to this brokenness. Feed these deepest hungers that our world seems to be starving from.

And Jesus turns to us and says “GIVE THEM SOME FOOD YOURSELVES.” He’s pointing out that we have the ability to do something because we have already been blessed with His presence… we Receive Him and if we accept Him and share Him, then that presence, that reality of Jesus’ Body and Blood can feed the hungers of the multitudes in abundance with the simplicity of our own seemingly insufficient loaves and fishes.

A blown call on a baseball field can become a great example of fraternal love and understanding between an umpire and a ball player. A few loaves and fishes can feed thousands. The presence of Christ that you and I are blessed with and receive in this Eucharist can feed this starving world with the richest of foods… If you and I are willing to give that food ourselves.