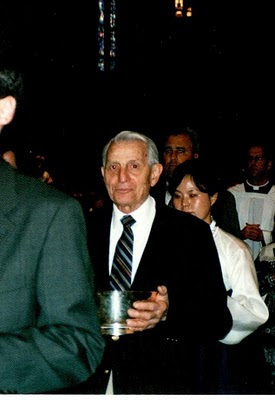 Hi everyone. Thanks to everyone for all of your thoughts and prayers for my Grandfather Jim Trippodi who passed away on Sunday and for my family during this difficult time. I appreciate all of your personal words of support and encouragement as I prepared to offer the Funeral Mass and preach at the funeral this morning.

It’s strange that his funeral should be the day before my 11th anniversary of ordination to the Priesthood. Each newly ordained priest was invited to have a family member bring up a ciborium of unconsecrated hosts up to the Archbishop at the Preparation of the Gifts during the Mass. I was blessed that he was able to do that, so the pics are of him bringing that ciborium up the main aisle of the Cathedral Basilica of the Sacred Heart; as well as pics of me and him during the first blessings.

A couple of people had asked if I was going to post the homily from today’s Mass. I hadn’t thought about it initially, but as a tribute to him, I’m happy to share it.

Again, thanks for all of your words of love, support and especially your prayers – Father Jim

Grandpa just turned 94, this past March. And the remarkable thing to me was that even though he moved a little slower in these last years, other than that slight change physically he was still the same Grandpa we always knew . . . His laugh. His smile. His desire to turn all of us onto eating cashews, Gergen’s Pickles, Peanut M & M’s (that one he was successful at). We were all convinced that he had to have stock in Walgreens where he would buy those things for us…

Maybe because he was alive and in such good health for so long, we kind of thought he’d always be here, which is why all of us were kind of shocked when he died so abruptly on Sunday. With this coming so suddenly, it’s easy and understandable for us to be really sad and to really miss him.

But one thing that seems to be helpful is our memories. After 94 years of them, we have a lot. For myself they’re like a huge box of photographs that had fallen from the top of a closet, pictures in no particular order – but whose randomness somehow makes sense. I didn’t really know where to begin. So I asked my brothers and my cousin Tracey to kind of help me sort through some of them. Here are some memories they have of Grandpa . . . 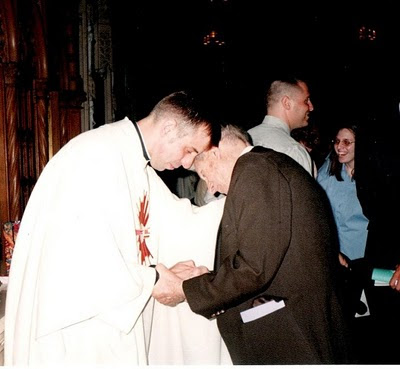 For Craig, one thing that stands out about Grandpa was his being the ultimate bargain hunter. Craig talked about how one time when he came home from college and Grandpa told him to go into the basement to do some shopping. Craig said, “There was literally enough laundry detergent down there to wash all of the clothes in New Jersey.” Every time the detergent was on sale, grandpa bought it.

His bargain hunting often had Grandpa finding ways to “get one over” on “the man.” For example, Craig said that just this past spring Grandpa had been ordering model cars from this company. They must have sent him the wrong model, so he called and reported it to them. By accident, they sent him two of the correct models. So now he had three cars. He called to try to return the one, and had the package and was ready to go, but apparently the man never came to get it . Grandpa called to complain about that, so the company refunded him the money he paid for his original order. Thus, he got 3 cars for free.

It wasn’t until a few weeks ago that Craig realized how much Grandpa had influenced him. Craig had had a flood in his basement. A couple of friends were over to help him clean up when they went into his laundry room they looked at him like he was insane, asking, “Craig, why are there 10 jugs of laundry detergent in there?” Craig replied, “Because it was on sale… my Grandpa would be proud.” No doubt that he was proud of you, Craig, and for more than just that reason.

My Cousin Tracey’s memories seemed to give credence to a suspicion of ours that comedian Ray Romano must have been spying on Jim and Minnie Trippodi for inspiration for the characters Frank and Marie Barone in his hit TV show Everybody Loves Raymond. Tracey recalled a night down in Wildwood Crest when my Mother, Uncle Phil, Aunt Lorraine, Grandma, Tracey and I went for a “short visit” to Atlantic City and had told Grandpa we would be back by 10. The reality was we didn’t pull up to the Jolly Roger Motel till almost midnight. We couldn’t help it, Grandma was on a hot streak and we couldn’t get her off the slot machine she was winning on. Well, there Gramps was, sitting on the porch. Everyone in the car got quiet – even Grandma knew she had a weak defense for making him get so anxious, for being so late; so much so that she somewhat conceded defeat (at least to us) as she mumbled, “Oh Geez, look at this.” Even as she tried to deflate the argument as she walked out of the car by saying, “Listen, I came out ahead,” you could tell he wasn’t interested in hearing about it. She might have lost that battle, but the Min – Jim show would continue.

Driving around town near Christmas, seeing houses all lit up with Christmas lights and decorations, Grandma would wait for the opportune moment to drop, “Yeah, doesnt that look beautiful – it looks just like my house” – noting that Grandpa didn’t want to be bothered putting up any Christmas lights that year. Tracey’s memories of Grandma and Grandpa busting each others’ chops definitely made me laugh and showed one more reason why they were married for over 55 years – they – and we could laugh at the small stuff; but when things were tough, like during those last three years when Grandma was in a nursing home – there he was at her side every day.

My brother Chris asked me exactly what would be appropriate to share in terms of his memories of Grandpa. Considering Grandpa’s love for The Three Stooges, and that type of humor, I think I can leave it to your imagination some of the – shall we say colorful jokes and humor that made Grandpa laugh hysterically to the point that he wouldn’t be able to get his joke out he would crack himself up. Chris said the first thing that came to mind was how Grandpa would laugh hysterically whenever the movie Blazing Saddles was on TV.

There’s something powerful about memories. They almost transport us back in time. Just hearing those stories and remembering them, – those scenes, those places are summoned up in a mysterious way. You can almost smell Grandma’s gravy on the stove, and see Grandpa walking in with Vitello’s bread. You remember the feelings that were so vivid at that time that, that for a moment at least, you can forget the pain of this moment.

That’s not because we deny this moment, or skip over the painful memories. But rather those memories remind us of bigger realities. Realities that aren’t tangible. And cannot be measured by balance sheets or awards. But things that are even more real than those things – like family, like joy, like love.

Which is why I think the use of memory is so important to Jesus. Look at what Jesus does in this gospel with these two disciples. Here they were so convinced that Jesus was the one – the one they had hoped for, the one their relatives had been anticipating for generations. So convinced were they that they had given up everything to follow Jesus. So why do we find them at the start of this story on this 7 mile trek from Jerusalem to a town called Emmaus?

The answer is Good Friday. After watching Jesus be arrested, tried, mocked, ridiculed, tortured and die on a cross . . . those horrific images devastated them. So much so that even when some of their fellow disciples report to them that the one they had believed in had risen from the dead, they couldn’t fathom it. Friday’s events had so shaken them that they couldn’t even consider that possibility. So blinded by their pain were they that they didn’t even recognize Jesus as he walked and talked with them on their journey of 7 miles.

How does Jesus open their minds to consider what was so inconceivable? How does he open their hearts to even entertain what seems impossible to believe? Jesus engages their memories. He makes them remember all that God has said and done. He makes them recall the faithfulness of God. He points out the love and the joy of God so much that suddenly they are transported. They see and remember bigger realities. And after this sharing of memories, we read that their downcast, heavy hearts all of a sudden began burning within them. 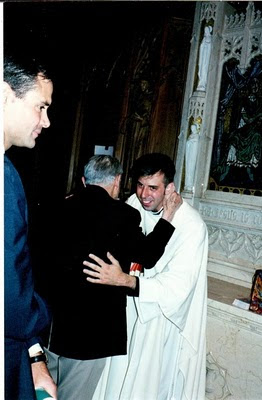 Which is why we gather today. We have to allow our hearts and minds to engage these memories so that the frightening and sad reality we face doesn’t discourage us from our belief that this isn’t the end for Grandpa or for any of us. The unbeliever can look at a dead body and be distraught. But Jesus invites us to recognize that if our hearts can be transported by loving memories of our Grandpa to transcend the sadness we experience today – then that is exactly how Jesus wants to share his presence with us right now.

We can begin to let these eternal realities, these ancient promises fulfilled in Jesus Christ – promises guaranteeing eternal life for all who believe in that (a reality which Grandpa himself looked forward to as he prayed every day – longed for these past 13 years, waiting to be reunited with Grandma); these promises, these realities; these memories reveal how – right here, right now Jesus Christ is with us. In this place, in these memories, in his word – how Jesus is with us now, and how Grandpa is right there, beside him.

Of the flood of memories I’ve had, comes one from when I must have been 5 years old. Grandma, Grandpa and I were in Grandpa’s pickup truck sitting in a cemetery during the burial of a relative. Being that little, I didn’t really know what had happened or what “death” meant – but I remember Grandma and Grandpa very calmly and confidently telling me that “it’s when we go home to be with God… it’s sad because we’re going to miss them, but it’s okay, one day we’ll all be together again.”