HAPPY PENTECOST SUNDAY EVERYONE! This week, I didn’t have to prepare a homily for Mass since I will be at the ordination of men to the “Transitional Diaconate” (men who will be ordained priests in May 2011). With the end of the Holy Father’s “Year for Priests” coming to an end, I thought I might share a variation of a letter I wrote to the students I minister to at Montclair State University at the Newman Catholic Center reflecting on the “Fatherhood” of Priesthood.

A couple of weeks ago, I was invited with our FOCUS (Fellowship of Catholic University Students) missionaries to speak in a Religions of the World Class on campus about Catholicism. It has always been a nice opportunity in the past to speak in this venue to a class of over one hundred students about our faith and our ministry here. Usually we give a 20 minute presentation and then allow the class to ask any question that’s on their minds.

Sometimes they might ask “Where’s the Newman Center?” or “where do you have Mass on Sunday?” Sometimes they’ll ask something they always wondered like, “Why do Catholics have to go to a priest for confession?” Or it could be something that they’ve seen in the news and want to talk about, like “What do you think about the clergy sex scandal?”

This time, things didn’t go as “usual” though. A student asked the missionaries “Why do you call him (pointing at me) FATHER when Jesus explicitly tells us not to in the Gospels?” Which, somewhat surprisingly, was greeted by applause from a few students in the back of the lecture hall, who obviously agreed with the question. The question (and tone that it was asked) takes Jesus’ quote out of context and attempts to slander Catholics as not being authentic Christians. We responded to the question, as the student, who was not listening, seemed to be preparing for his next scriptural/question to ask/debate.

But the whole time I kind of smiled at the question. Why do you call him Father?

It’s not something I had thought much about in my early years as a priest. I understood the theological reasons for the title. How it came into our tradition. But it was something that seemed a bit odd to me. Being ordained at the age of 25 and being the youngest person in many gatherings in my first assignment, I often saw the title as simply a title of respect, while admitting that it did feel a bit awkward at times to have a woman in her 70’s calling me in my 20’s “Father.” I suppose at that point in my priesthood, being called “father” simply humbled me – always reminding me that being a priest was more than just a “job.” I had a spiritual responsibility to the people God had called me to serve.

Being assigned as the Chaplain at Montclair State University though, I have to admit that I see the title “Father” in a whole different light. When Archbishop Myers was assigning me to come here he joked that at my age of 33 that I was closer in age to many of those I’d be ministering to, that many of them might relate to me more like an older brother than as a “father.”

But as we prepared to see a large group of students graduate and leave from MSU, I kept finding myself getting really choked up. At first I wondered why am I getting so emotional about all of this? The reality is, tears point to a greater reality. They reflect something deeper going on. Part of it was that I could see how all of these students have grown so much in these short – fast moving – incredibly memorable years. And with that observation I found myself worrying did we do enough – have I done enough to help them grow closer to Jesus Christ, to help them hear His voice, to bolster their confidence to follow His call for them in their lives.

But even more, the tears taught me something much more important – I realize now on a much more intimate level the beautiful gift that priesthood is. That God could entrust these young people as my kids and that He has called me to be their Father.

And so with some a lot of tears, there are a lot of things I give thanks to God for as I reflect on all that these students have all done over these years: from building up our Newman Catholic Campus Ministry into the thriving, respected, talked about organization that it is on campus; to the most important thing – growing in their love of Jesus Christ and the Roman Catholic Church that He founded. Just reflecting back on all that has happened here in these three years that accomplished both of those goals through all of us coming together and working together, I’m blown away by it.
But on a purely selfish level the thing I so appreciate is that these kids have made so dynamically real to me the “Fatherhood” of being a priest. In some ways, I can understand the fears, the concerns, the worry, the love that some of my friends who have kids themselves share in their experiences of being parents. On a different level I “get it.” I can look at my parents with a deeper sense of gratitude for their sacrifices realizing how often I must have caused them sleepless nights and anxious days (and probably still do…) Because I have come to see how much I truly love these students – not just as my little brothers and sisters; but as my spiritual children.

So I simply ask them for forgiveness for my many weaknesses and failures. Everyone learns – whether they have children themselves or if God is calls them to be a priest or religious and he gives children in a different way – there’s not a manual on how to do all of this parenting stuff. 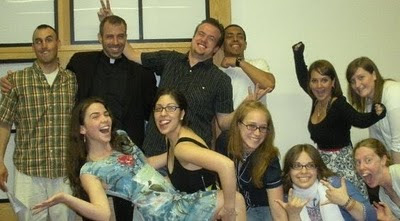 To be a parent, you simply give yourself, empty yourself for those you are called to offer that gift of self to in whatever vocation it is that God has called you to. None of us can do that perfectly, and so I know as I look back there are things I wish I could re-do or do better.

But I hope that the weaknesses and failures don’t obscure the love I have for all of the people I’m called to serve. And even more, I’m grateful because this has caused me to love Christ even deeper. As much as it hurts “letting go” of all of the students who leave, I’m blessed that he put them all in my life in the first place. And I know that, unlike a professor, an advisor, or a coach – they will always be a part of my life, my family.
And I will always remain, their Father Jim…