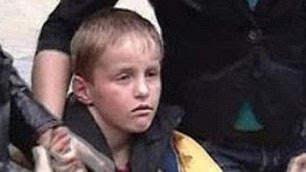 Hi everyone, here’s my homily for the THIRD SUNDAY OF EASTER – April 18, 2010. The readings can be found at http://www.usccb.org/nab/041810.shtml . As always, thanks for reading and all your feedback and comments. I appreciate it! God Bless, Fr Jim

You have to wonder, if there’s two sides to every story, and a picture is worth a thousand words, then what are we to make of this: About a week ago, a photo of a 7 year old, frightened little boy appeared in newspapers across the world with headlines similar to the one in the NY Post: “US Woman put adopted Russian son on one-way flight alone to homeland.” Now you have to be a little skeptical when your dealing with reporters and journalists whether they are getting their facts straight or are more interested in sensationalizing something. It’s natural that we want to believe that there’s got to be another side or that we’re missing something.

But in the days since this story first broke, there really hasn’t been much said that challenges or disputes the awful feelings you get as you hear this report: The boy, Artyom Savelyev, arrived unaccompanied in Moscow on a United Airlines flight on [April 8] from Washington. Social workers sent him to a Moscow hospital on Friday for a health checkup and criticized his adoptive mother for abandoning him…the boy was carrying a letter from his adoptive mother saying she was returning him due to severe psychological problems. “This child is mentally unstable. He is violent and has severe psychopathic issues,” the letter said. “I was lied to and misled by the Russian Orphanage workers and director regarding his mental stability and other issues. …After giving my best to this child, I am sorry to say that for the safety of my family, friends, and myself, I no longer wish to parent this child.”

Like I said, we want to give the benefit of the doubt, and assume we’re missing something. Because otherwise we’re left with the impression that this little boy who was adopted about 8 months ago, has ended up being treated like an article of clothing that someone decides doesn’t fit them and is simply returned from where they got him, rather than a CHILD in need of a parent. Which is why there’s been such outrage over this incident all around the world (and sadly, this case has now jeopardized the adoptions of many other Russian orphans by American parents who are desperate to welcome them into their families). The reason many people are upset about this is because, it’s pretty much a given, whether you’re a parent or not, that children are far from perfect. Children will often times mess up. Children can be self-centered at times. Children, sadly can even say and do unloving things. Ideally it is the role of parents, by their lives, their sacrifices, their example – by their love to teach children how not to mess up, how to be selfless, and how to be loving themselves. Obviously if the adoptive mother was overwhelmed and unable to fulfill her role as a Mother something needed to happen. But the image of this little guy being sent home alone on a plane to Russia simply with a note, and the question – what was it that he did that made this mother give up on him is difficult to even consider or accept.

After that sad story we hear some incredible and important good news. The Gospel gives us the complete opposite message. Because one of the essential points we can take from this passage we just heard is that Jesus doesn’t give up on us… ever.
Just sit with that. Jesus doesn’t give up on us – ever.
Jesus has been raised from the dead. The Apostles, his followers have encountered him twice already. After those two encounters, we read at the beginning of today’s passage St. Peter saying “I am going fishing.” Now as a quick recap here: Jesus had been betrayed by one of his chosen 12, Judas;
during his trial, Jesus is denied by Peter.
He ends up dead on a cross.
And this amazing, unprecedented thing called the Resurrection,
which fulfills the deepest wish,
the longed for hope,
the greatest desire in the hearts of all humanity – to have a life that doesn’t end- happens on Easter Sunday. In that, all that Jesus had ever said about His Father’s desire for all of us, His creatures to have life more abundantly, to it’s fullness. And that the good news Jesus proclaimed of the depth of God’s love for us was all confirmed to be true with this central event to human history.

So here’s the one that Jesus had chosen, the one he had told –
you’re the guy,
you’re the one who’s going to lead them after me –
you’re the one who will be the rock on which I will build my Church –
Peter, our first Pope – how does he react to this incredible event just a few days after Easter?

“I am going fishing”…

Why? Because Peter, knew that he had messed up… big time. Peter had been self-centered. Peter had been unloving at the moment Jesus needed Him to stand up the most. And that denial of Christ killed Peter. As soon as he heard the rooster crowing on Good Friday reminding him of Jesus’ prediction hours earlier saying “before the cock crows, you will have denied me three times,” Peter’s heart broke. He had yet to experience the fullness of joy that the resurrection brought to the world because of this broken heart of His. And so in shame, in guilt, in sadness – not knowing what else to do, he returns to something familiar from his former life. Something he knows how to do. A place where he probably figures “I won’t mess up here.” He goes fishing.

But – Jesus doesn’t give up on us – ever… and he goes after Peter. In this scene, Peter’s out with the others (who’ve continued to follow him) – and now on top of being a miserable failure to the Son of God – here he is after a long night and Peter and the others can’t catch any fish. (Talk about things going from bad to worse….) Someone from the shore calls out “hey, you catch anything” – “NOPE – thanks for asking…” The voice responds “Try the other side” – and Peter’s probably thinking – “UHH… this sounds familiar…” And sure enough – BOOHYAH – a catch of a multitude. John shouts “It’s the Lord” (Peter’s probably thinking – “no kidding”) They return to the shore, they eat with him, they interact once again with this glorified Jesus for now the third time.

Now Jesus does something that to me is one of the most beautiful encounters in the Gospels – probably because I’ve been a miserable failure in my life many times and find this reassuring… He asks Peter – “do you Love me?” three times. On the surface it seems like – wow, is Jesus trying to make Peter feel uncomfortable? Is this Jesus’ subtle way of saying “Yo bro – yeah – what happened there on Good Friday – did I tell you? Did I predict it – COCK A DOODLE DO and it was like PETER – OUT!”

No it’s not that at all. Jesus’ is helping the child Peter become a parent, a father himself for the Children, (or rather the sheep) he will be leading. Jesus doesn’t give up on Peter, and he makes him see past his mistakes, past his failures, past his selfishness; drawing what was even greater out of Peter’s heart – Lord, you know I love you… Lord you know I love you… Lord you know EVERYTHING – YOU KNOW THAT I LOVE YOU.” Peters confessing his love three times after his triple denials has now impressed the truth that Love conquers sin even more deeply in Peter’s heart than his previous failures had wounded it. He can now “feed” the flock Jesus entrusted to him – with that same life-changing message – that Jesus doesn’t give up on us – ever… that he is constantly calling us to this new, more radical, full life.
And not our doubts,
not our fears,
not our messes,
not our failures,
not our selfcenteredness,
not even the lack of love we sometimes show will ever alter that.

In a world where people can be far more absolute and harsh in their judgments for far less, the Easter Message of Hope continues to invite us to experience the new life of the resurrection ourselves right now. It’s reassuring to know though, that until we do – Jesus doesn’t and will not give up on us – ever…