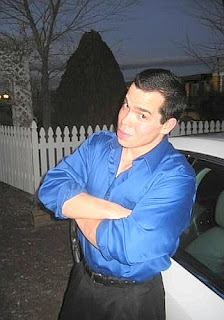 Hi everyone! Here’s my homily for the Fifth Sunday in Ordinary Time – February 7, 2010. The readings can be found at http://www.usccb.org/nab/020710.shtml. Thanks so much for reading and your feedback and comments! God Bless – Father Jim

The Women’s movement can celebrate another historic milestone. 90 years after the right for women to vote was (finally) corrected – among numerous other strides made to right different injustices and inequalities among the sexes, this news came out of Nevada over the last few weeks. Yes, another first in attempting to find balance of the sexes it was reported that we now have the nation’s first male prostitute (or perhaps, more accurate would be to say the first Legal male prostitute). It’s true, in the state where prostitution is legal, it’s hard to believe that it’s taken this long for a man to be given the same legal authority to do so.

I have to admit that I’m about ready to cancel my subscription to the New York Post which reported this story. It was bad enough a few weeks ago that the “escort” who’s “relationship” with the Former Governor of NY Eliot Spitzer (which resulted in his leaving office) began working as an advice columnist for the paper. Well this past week, in the “entertainment” section – you know the part of the newspaper that usually reviews upcoming Movies, TV shows, things that are going on in the city? Well this week there was a 3 page feature on Markus, a 25 year old, ex Marine who dropped out of a career in porn because he felt that was “degrading” to women who works at a brothel in Nevada as the first male hooker. So instead of reading a movie review, we got a detailed review of the (AHEM) date that this (AHEM) reporter had with him,

Oh don’t worry, the professional, journalistic standards remained intact as Mandy Stadtmiller, the reporter made it clear she didn’t sleep with him. The self-described desperate spinster, lonely divorcee, undercover reporter was going for investigative purposes only

The thing that’s shocking is how non-shocking this whole article seemed to be. While prostitution isn’t a new thing – people used to be embarrassed or ashamed by sins like this. Yet there seems to be an acceptance, even a sense of legitimacy that’s being attributed to this as the nation’s oldest newspaper does this expose with color pictures of the male hooker with his client who has legally paid for his services. It wasn’t even a news story reporting one of those “Bizarre but true” stories, but an actual review. I’m actually surprised they didn’t have a box with a ratings scale from 1 to 4 stars (or some other appropriate symbol??)

The whole thing — if you can’t tell by now – disturbed me on so many levels. Not just because it’s a glamorization of sin. But it showed the effect of sin on all of us. That many of us accept living lives that remain simply on the surface of things. From this reporter, and whatever other clients have hired this guy to those of us who read stories like this, or tune into equally messed up TV shows, movies. It seems that we constantly go for or accept the “least common denominator.” Brokenness and the exploitation of it for others entertainment seems to be the norm. Rather than go deep and deal with the causes of brokenness or loneliness, rather than dealing with how bad choices have resulted in widespread unhappiness, more and more it’s celebrated.

With so many around us who promote these bad choices – for example at the University I work, why would they chose to have a chaste loving relationship when our own health center on campus is giving you a condom – it’s hard not to be discouraged. It’s hard not to give in. It’s hard not to think it’s even possible to live any other way, and your portrayed as weird if you try to do so. Must be one of those crazy religious Catholics…

Why are we even here at Mass? When so many of your peers are planning nights out that would make that article seem tame by comparison, how do we deal with that? Why do we bother?

Because something in our heart

Something in our soul

Something deep within is calling– challenging us not to accept what the world considers “normal.” Something tells us not to buy into the depravity that spreads it’s sadness, emptiness and brokenness as it’s promoted and celebrated with a recklessness that can be breathtaking to those who try to live a virtuous life.

Tonight’s Gospel seems on the surface to be one of those miracle stories of Jesus. Yet looking at it closer, we can identify that “something:” the voice of Christ. And his voice is inviting us to a deeper relationship a more meaningful life than what appears before us. Because this isn’t just about fish. Let’s look at this story again – Peter and the others, they’ve been working all night. They’re tired. They hear Jesus, they see the crowds, and Jesus says to them – go back out go out deep. Go into deep waters.

You can almost hear what Peter is thinking in his mind: Why Lord? No offence, you’re great and all, but you’re a carpenter, what do you know about fish – you just don’t understand – nothing’s going to be different. This is it. Just tired disciples who have worked hard and come up empty nets.

But it is Jesus, so they relent. And what happens? They are blessed with such abundance they can’t contain it. They’re overwhelmed by it

This isn’t about fish… Jesus knows how empty our nets can be in life. And that we grow tired of struggling with the same sins. We can grow weary of even trying to muster the energy to do the absolute minimum. Maybe even coming to Mass on Sunday can be a big deal (it’s obviously not for a lot of your peers…) A few weeks ago when we were at the FOCUS conference, one of the themes built upon Pope Benedict’s words to young people where he said “The world promises you comfort, but you were not made for comfort. You were made for Greatness…” I really have sat with that quote a lot and there’s such wisdom and Gospel truth in that.

It doesn’t have to be an extreme like a the gigolo who charges money to alleviate the obvious pain of a self-described desperate spinster, lonely divorcee, undercover reporter. It’s all of us.

All of us, like St. Peter, hear these calls to greatness from the Gospel.

All of us, like St. Peter, because we know our sin all too well – know how we are conflicted, and tempted, and struggle, and fail so much that part of us doesn’t even feel worthy to be in his presence.

Yes, as we see the abundant life that Jesus is inviting us to and know our sense of unworthiness, all of us can relate to St Peter, and can imagine making his words ours DEPART FROM ME LORD FOR I AM A SINFUL MAN.

We are willing to settle for the world’s comfort.

Yet Jesus isn’t giving up on us. Jesus sees our brokenness, sees our doubts and fears. Jesus looks at us with those eyes of Love and invites us to go out into deep waters with him. Away from the noise of the world with it’s screwed up messages. Away from the distractions that keep us trapped in thinking these promises of God’s favor are for someone holier than me… He says simple words directing us to a fuller existence and appreciation of who we are his brother’s and sisters, who we are as God’s sons and daughters… Jesus says to us do not be afraid… Will we join Peter and the others – truly leaving this world and its empty promises behind – leaving everything behind to follow him?