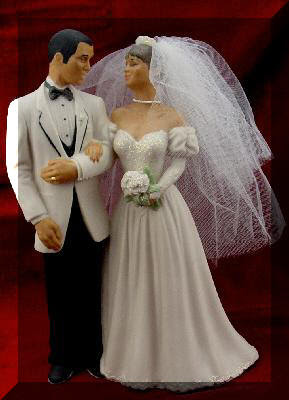 Hi everyone. Thanks for checking out my blog and reading my Sunday Homily. I’m grateful for your feedback and reactions. Here’s my homily for the 27th Sunday in Ordinary Time – October 4, 2009. The readings can be found at http://www.usccb.org/nab/readings/100409.shtml. The Gospel is Mark 10: 2-12:

The Pharisees approached Jesus and asked,
“Is it lawful for a husband to divorce his wife?”
They were testing him.
He said to them in reply, “What did Moses command you?”
They replied,
“Moses permitted a husband to write a bill of divorce
and dismiss her.”
But Jesus told them,
“Because of the hardness of your hearts
he wrote you this commandment.
But from the beginning of creation, God made them male and female.
For this reason a man shall leave his father and mother
and be joined to his wife,
and the two shall become one flesh.
So they are no longer two but one flesh.
Therefore what God has joined together,
no human being must separate.”
In the house the disciples again questioned Jesus about this.
He said to them,
“Whoever divorces his wife and marries another
commits adultery against her;
and if she divorces her husband and marries another,
she commits adultery.”

A gospel that’s asking for a homily on marriage here in USA in 2009 – there’s nothing controversial there, huh? I would imagine that for a lot of people hearing this Gospel, there’s a great temptation to shut down or tune it out or explain it away or look for some loophole…(even as a priest, maybe I can just talk about the second reading this week)

After all, statistics tell us that all of us know people, (or are people) who’ve experienced divorce. We hear how Politicians are becoming very bold in saying that they will change the definition of marriage from what has been understood as one thing for thousands upon thousands of years to what present day society claims to be a more enlightened understanding of marriage being simply about people loving one another. (Particularly here in New Jersey, politicians boast that, no matter what the results of the election, they plan on passing “Gay marriage” in the lame duck session after the election) If you take a look at all the prime time television shows – almost every night there’s something in prime-time that tries to legitimize or normalize divorce, out of wedlock relationships (that are usually sexual) and gay marriage.

Society seems to keep telling us that things have changed and that religion needs to get with the times. If you should happen to disagree or question any of these things that society has accepted, well then you’re conservative or you’re closed minded o r worst of all you’re being hateful.

So we’re bombarded with these realities in our world and hear this Gospel and what do we think? Jesus must have been misquoted? Or, maybe Jesus didn’t really mean what he said ? There are some who will argue those theories. In fact I know of a few ministers who will work REALLY REALLY hard on this theory and confuse the issue (and their people) by asking questions upon questions that are designed just to muddy and confuse things just enough so that their people aren’t sure. They provide just enough cover for people to claim ignorance since, they can argue “we’re not biblical experts,” and because these ministers are saying things that will make religion a bit more acceptable to the world around us with it’s ever changing realities, some buy into what they’re teaching…( In this instance, it is those ministers who are the ones who are ignorant, but that’s for another time, another place)

The notion of marriage being a s acred bond between a man and a woman who become a husband and wife for life is treated more and more as a novelty or a relic of a former era.

The thing that is striking in reading this Gospel is how little things have changed in 2,000 years. Sure we have evolved over a couple of millennium with twitter and you-tube and all now. But if you look at what the Pharisees are saying and doing here – they’re simply looking for a loophole. Jesus is asked this religious question “Is it okay for a man to divorce his wife?” The fact that the Pharisees asked the question tells me that they already knew it was wrong. Have you ever noticed that no one ever asks “Hey Jesus is it okay to give a starving person some food?” People seem to know on some level instinctually what is right and what is wrong. So they knew on some level that there was something wrong about divorce.

But they also knew it was a controversial issue that divided people Heck, it had been since Moses was around. Moses in fact got to the point that he couldn’t deal with the c onstant whining and complaining and arguing by the people over this issue. At the same time, Moses was worried about all the abuses that were being done and how women were being treated like property. Yes, he saw that sin had deeply wounded an institution that God had created. God gave this gift of marriage so that when a man and a woman come together in this committed relationship, sacrifice their individual selves for the other and live that commitment for the rest of their lives – that would enable them to participate in the divine act of creating new life. Thousands of years ago, people struggled, some failed and some more (a vocal group to be sure) looked for a loophole and so Moses relented and relaxed God’s mandate.

Yes, Moses allowed divorce because he couldn’t speak to his people’s hearts or change them. Moses was a great man, but even he knew he couldn’t do that. No God himself would have to do that. Enter Jesus. That is Jesus’ mission – to change hearts, to reclaim them to what they were originally designed and created for. To make us stop looking at God’s commandments and rules and laws as things that inhibit who we are or what we want to do (and looking for ways to do that without getting him angry at us) and=2 0instead realize that God’s law, God’s commandments are designed to give us the instructions on how to make God’s heart our own.

This isn’t about bashing people who’ve suffered through divorce or have made bad choices or struggle with different sinful temptations. It’s about recognizing the pain of those things and trying to help others not go down those same roads. We do that by revering God’s law, not by redefining it or making clauses, exemptions. Misery doesn’t love company, it just brings together more and more miserable people.

A few weeks ago, I was attending a Mass for the installation of a new pastor. Before Mass began, this middle-aged woman came in to ask the Bishop to do a blessing for her parents who were celebrating their anniversary that night. I must admit, knowing how long these Installation Masses can be, coupled by the fact that I wasn’t sure where I parked in Hoboken was a great location and all – well, I wasn’t exactly overjoyed or excited that Mass was going to go even longer.

After communion, the Bishop invited the couple up, and these two older people started to walk up the aisle. Holding their hands – already with tears in their eyes. They got to the foot of the altar and the Bishop asked them how many years they were married, and the wife responded 60 years. And then when he asked them, where did they get married and she said right here – I don’t think there was a dry eye in the Church.

I watched them and how they couldn’t even really look at each other. But that they, very lovingly kept holding and rubbing each other’s hands. What had they lived through? What struggles, which seemed insurmountable at times, had they conquered? What joys and moments of pride, what sleepless nights of worry had they had over their children? What twists and turns, ups and downs did they encounter? How often did they think “THAT’S IT – I CAN’T DO THIS ANYMORE” – and yet found the grace from God to give them the strength to try and return to that commitment they had made. I have no idea – I don’t even remember their names – I don’t know their story. But I know that I witnessed something radically sacred. I know that those were two people who weren’t perfect – but kept trying, 60 years and counting, to live those radical, life altering vows.

I wonder what they think today… They probably don’t even watch or know of the top rated shows that lampoon and mock their commitment and label it as cute nostalgia (their probably too busy chasing after their 15 grandchildren and 3 great grandchildren) I bet For them, there’s nothing controversial about marriage – as the simply live everyday of their lives bearing witness to the beauty of God’s truth. Yeah, I bet they’re glad they’re weren’t any loopholes.