Latest News
Home /Blog/HE MUST INCREASE, WHILE I MUST DECREASE 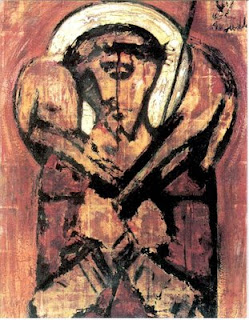 Dear Brothers and Sisters in Christ:
This picture is of an icon of Christ the Good Shepherd made by a devout Catholic artist from Spain named Kiko Arguello. When a man is ordained a priest, it’s a custom to have prayer cards to remember that occasion, with the hopes that your family and friends will take the card and remember you in their prayers (seems to make sense, doesn’t it?)
This was the image I had picked for my prayer card. I don’t remember the first time I saw it, but whenever that was, it spoke to me. In this illustration, Jesus appears humble, simple, as he holds the sheep over his shoulders with his arms crossed over his heart as he does so.
On the back of this image, I had the words: “He Must Increase, While I Must Decrease…” from the Gospel of John 3:30 and the words from Terrence Cardinal Cooke: From the day of his ordination, a Priest can never forget that he has been called by God Himself. . .Called to be a servant, a victim, a brother, a listener, a friend… With my own words asking for prayers that me and my brother priests would never forget that…
Usually in my ADHD brain, I’m multi-tasking/planning/thinking about upcoming things. But in the last few weeks, I’ve found my mind thinking back over these past 10 years. So many memories come to mind. People that I would never – ever have come in contact with, never known who they were or what their stories were – somehow through God’s plan, somehow I was a part of major moments in their lives- births, deaths, marriages, struggles in those marriages… In these years, there were many nights I would go to bed and think “God, really? You really want me to be here? Am I really helping them?” When I do stop and seriously think of all the different moments, the over 3,500 Masses I’ve offered – the faces of people that God has asked me to serve… it’s beyond overwhelming.
Just to be honest they weren’t always happy, good times. In fact, there were times of heartbreak like I had never experienced before. But here’s the thing I’ve learned through all of that – is that God never abandoned me. In my disappointments with others or with myself. In my inadequacies, my own failures, there was Jesus, that Good Shepherd. And as much as I wished to imitate Him, so often, I realized I was the sheep being carried by Him.
How do I thank the Lord for all He has done for me?
At my “first Mass” almost 10 years ago in my home parish of St. Agnes in Clark, I said to my family and friends that day that everyone was “thanking me” or “congratulating me” for my ordination and I felt kind of awkward because I felt like I hadn’t really “done anything” yet. Yes I had responded to God’s call to be His Priest; which is no small deal… but the outpouring of love I felt far exceeded whatever I had done – what I had given.
And 10 years later, that still remains the case.
So I simply want to say thank you to all of you for demonstrating God’s love, for being Jesus Christ, the Good Shepherd “carrying me” when I hoped I was carrying you.
If I have one prayer, it is that more men and women will hear and respond to Jesus’ invitation to be give up their lives and serve as His priest or religious. Not because of anything I’ve done, but because you can see what he has done for me…
I Love all of you so much! Thank YOU!
In Christ’s Love,
Fr Jim
Fr Jim