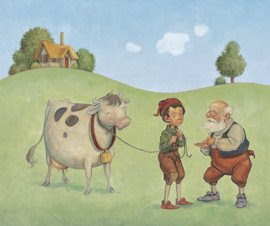 Here is my homily for the Seventh Sunday in Ordinary Time, February 22, 2009. The readings can be found at http://www.usccb.org/nab/readings/022209.shtml. Thanks for reading – and I appreciate all your feedback and comments – Fr Jim
HOMILY:
More than likely, everyone has heard the fairy tale “Jack and the Beanstalk.” As familiar as the story is, to refresh our memories just listen to the beginning of the tale, presented in a slightly varied form in the book Politically Correct Bedtime Stories:

Once upon a time, on a little farm, there lived a boy named Jack. He lived on the farm with his mother, and they were very excluded from the normal circles of economic activity. This cruel reality kept them in straits of direness, until one day Jack’s mother told him to take the family cow into town and sell it for as much as he could. NEVER MIND the thousands of gallons of milk they had stolen from her! NEVER MIND the house of pleasure their bovine animal companion had provided! And forget about the manure they had appropriated for their garden! She was now just another piece of property to them. Jack, who didn’t realize that non-human animals have as many rights as human animals –perhaps even more – did as his mother asked.

On his way to town, Jack met an old magic vegetarian who warned Jack of the dangers of eating beef and dairy products. “Oh, I’m not going to eat this cow,” said Jack “I’m going to take her into town and sell her.”

“But by doing that, you’ll just perpetuate the cultural mythos of beef, ignoring the negative impact of the cattle industry on our ecology and the health and social problems that arise from meat consumption. But you look too simple to be able to make these connections my boy. I’ll tell you what I’ll do: I’ll offer a trade of your cow for these three magic beans, which have as much protein as that entire cow but none of the fat or sodium.”

Jack made the trade gladly and took the beans home to his mother. When he told her about the deal he had made, she grew very upset. She used to think her son was merely a conceptual rather than a linear thinker, but now she was sure that he was downright differently abled. She grabbed the three magic beans and thew them out of the window in disgust. Later that day she attended her first support group meeting with Mothers of Storybook Children…

Jack’s mother is upset because she had faith in her son to be able to take this cow, and get some money for it. She had a specific expectation, a reasonable assumption that old Bessie would be worth a few dollars, not a few beans. More importantly she was looking for an immediate response to an immediate problem, and this simple minded son of hers didn’t exactly get her what she wanted.

These last few weeks that we’ve been reading the Gospel of Mark, we keep hearing miracle stories. Demons are being cast out that had tormented individuals for years. A mother-in-law (!!!) is cured of her fever after her son-in-law (!!!!) requested that cure. A man suffering from leprosy is miraculously healed. So with all of these incredible things going on, Jesus has caused quite a buzz. People are seeking him out. Because, just like today, everyone has problems. Some more severe than others. But for each and everyone of them, their problem is especially real, especially burdensome, especially challenging to them.

A relative is sick. A friend is dying. A person’s out of work. A family needs money and all they have is a cow. And so in the Gospel, we have this scene where people have completely surrounded this house. Imagine that the Jonas Brothers are appearing in a shed, right next to a High School at 3:15 in the afternoon. That’s the type of crowd you have here. Jesus is like a rock star.
Funny thing, St. Mark, as he’s writing this account seems like he’s outside as well… like he couldn’t get in. Because we don’t get to hear from Mark what Jesus was preaching to this crowd. And more than likely, most people that were there that day weren’t interested in that preaching anyway. They are hoping they are the next ones to have their problems healed or fixed by Jesus. That he will cure them of their ailments.
Into this scene, these 4 guys come. They too have heard about Jesus appearing in Carpernaum in his return engagement. And here’s there chance. There buddy who’s a paralytic, they say to him – we’re going to take care of you bro. This Jesus guy we keep hearing about – he healed this guy with a demon. He cured a leper – A LEPER! He even cured Simon’s MOTHER IN LAW! There’s no way he won’t be able to cure you too… And we’re going to make sure he sees you and cures you.
You have to admire their mocksie – they get there a little too late. The crowd’s way bigger than they thought (did they think they had inside information about Jesus’ appearance that day?). But they promised their friend that this guy Jesus would see him, and do that thing that he does to cure him. So they go our, grab a ladder, rip open the roof, lower there buddy down on the mat, right in front of Jesus.
You almost wonder was Jesus in the middle of proclaiming the Beattitudes “Blessed are the poor in…” RIP – “What was that???” and this paralyzed man is lowered right there and then. The whole room, probably people who were waiting on line or in the front are probably a bit peeved thinking “they cut- we want our cure too.” The 4 guys are on the roof – as they watch Jesus, they see him approach. “This is going to be great, Jesus is going over to him! AWESOME, HE’S GOING TO GET CURED”. The room’s attention is focused. The crowd is silent and they are now paying attention to Jesus’ words as he says “CHILD YOUR SINS ARE FORGIVEN.”
“Huh?” They probably were as excited to hear that as Jack’s mother was when her son came running in and said “Hey look Mom – BEANS.” And the crowd was kind of taken aback. And the scribes, oh those scribes – They were skeptical to begin with of this new Jewish phenom. It was one thing when all these people keep reporting these miracle cures. That was suspicious enough. Now they were dealing with this blasphemer. God forgives sins – who’s this guy think he is?
Jesus keeps trying to tell them who he is. He keeps trying to get the message out. He DOES forgive sins. You can almost imagine him setting it up for them like an “if-a-and-b-then-c” equation from high school geometry class: “Okay, a) only God can forgive sins. b) I forgive sins. Therefore, c) I am . . ?” and waiting for their response. And how important his forgiveness is, which he offers us, how much we need that! But we keep forgetting that. It’s still more impressive to us, today, if someone were to come here in a wheel chair and then walk out, than it is to hear Jesus say to us (through a priest in the Sacrament of Reconciliation), “I absolve you of all of your sins.”
Last week we read how Jesus cured the Leper first and then told him to keep the miracle to himself and to rejoice in his being restored with his community by the Love of God. That didn’t exactly go according to plan. He told everyone he met (can’t blame the guy) But because of things like that, people keep going to Jesus looking for the quick fix, the immediate fix to an immediate problem. It’s like they’re asking for a broken leg to be fixed ignoring their body is afflicted with cancer.
And that’s the point. Jesus is more interested in healing all of us of the cancer of sin that continues to afflict all of us – he’s more interested in restoring us as Children of God than to just fix the laundry-list of problems that afflict us on a daily basis. Not that he’s not interested in those problems, too; he just sees the bigger issues, the bigger problems, the things we might ignore that are afflicting us, too.
Trying to underscore that point, Jesus basically points out to them, “Look, I know you’re not thinking about that… I know some of you are thinking, ‘Who are you to forgive sins?’ And if I have to heal this guy from his paralysis and tell him Rise – pick up your mat and walk, in order to get my point across – then so be it.” And that definitely got people s attention.
What will it take for us? Jesus wants to radically transform our lives. He’s hoping to inspire us in a faith that makes us want to rip open a roof to find him. And to trust him that, whatever it is he gives us as we go to him- whether it be magic beans, or, more likely, his Love and his mercy -it will be exactly what we need.