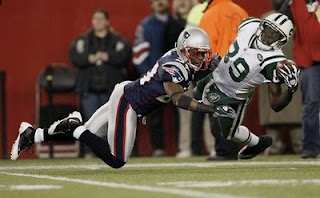 This is my homily for the feast of Christ the King – Sunday November 23, 2008. The readings can be found at http://www.usccb.org/nab/112308.shtml
Thanks for reading. God Bless – Fr. Jim
HOMILY:
To be upfront, I’m not a Jets fan. In fact, I’m not really a fan of professional football. I enjoy watching college football like when Boston College beat up on Notre Dame a few weeks ago, and I’ll tune in from time to time to watch an NFL game, but it’s not like I have any real deep fan allegiance (baseball, that’s a whole other story…)

About a week and a half ago, I tuned into the Thursday Night football game. I wasn’t even sure who was playing. I had put the game on for some background noise until “The Office” came on. As I looked up at the television from whatever it was I was working on, it was towards the end of the first half. And the New York Jets were beating the New England Patriots by the score 24-6.

I looked and said, Oh man, forget this, it’s going to be a Jets blowout. So I turned off the game. Like I said, I wasn’t too interested to begin with.

Next morning, I pick up the newspaper and on the back page was a headline informing me what I had expected – the Jets had won. But the smaller headline right underneath caught my attention as it said Jets win in overtime thriller. Huh? What happened? Quite a lot actually. Not long after I had changed the channel, the Patriots had mounted a nice comeback. The Jets, as their history usually shows, found ways to bungle early advantages. Sending what looked like an early night and an easy defeat into a game that went into overtime and turned out to be very exciting.

I wonder though, how many supposed “fans” thought the game was over like I did earlier in the night. How many supposed Patriots fans bailed early in the game, (or for that matter, how many of them bailed early in the season when Tom Brady got injured, just thinking their season was over). How many Jets fans began to feel demons from their team’s past had arisen again, subjecting them to another awful loss in Jets history and holding off their hopes of being in first place once again.

See, that’s the difference between the supposed fan and the real-deal fan. The difference between the bandwagon fan and the die-hard fan. For example, I have friends who have been die hard Mets fan since they were little kids (a long, long time ago). The past two Septembers they’ve watched their team implode on the very last day during the very last game of the season . . . two years in a row. Yet, in a few weeks, they’ll start paying attention again as the Mets begin Spring Training. They’ll start repeating the Mets semi-motto, “Ya Gotta Believe”, in response to the question, “Can our team pull together a world-championship team?” If the Mets do win a World Series Championship, that triumph will mean a lot more to them than to those who, the last week of October, will be buying a Mets T-shirt and wondering whose name is on the back.

All of that’s understandable though . . . everyone wants to be with a winner. It’s harder to stand by when things are rough and tough. It’s hard to stay loyal when things seem to be falling apart for your side. Which is true not just in sports.

It’s hard to stay faithful to God when bad things happen. When unexpected illnesses happen. When tragic, earth-shattering deaths occur. When you start to feel the whole world is against you as that job falls through, that friendship dissolves, that project or thing you’ve worked on proves to be a failure – as others seem to skate by without much effort . . .

Christ is the King? Really? Sometimes it just doesn’t feel like it. Sometimes it seems like its halftime and our team is down and it just doesn’t seem possible to mount a comeback.
Which is why we have this feast today. Next Sunday is our “New Year’s” in the Church as we celebrate the First Sunday of Advent. So we end the Church Year by reaffirming that the game’s over, folks. Jesus has already won. That victory happened when Jesus rose from the dead on that first Easter Sunday over 2000 years ago.

As awful, as frightening, as challenging, as difficult as life can be at times . . . nothing can change that fact – that in the course of human history, there has only been one Man who was Crucified, Died, Rose from the Dead and ascended into Heaven.

And more than just fans, we belong to His team.

The problem is the opposition is working overtime to convince us the game’s still going on. And, in very painful ways, our faith is tested, our loyalty can wane. Sometimes in small, annoying ways we can grow tired and it’s hard to be too excited about our faith. And, sometimes, such awful things happen that shake us to our very core that even the most “die-hard fans” of Jesus begin to wonder what’s going on.

Which is why we come together. It’s why we still gather. We come together to remind ourselves that our King’s victory has been sealed. We come not just to be in the presence of our King – but to have the opportunity to receive Him into our very lives as well. To know that He is with us every step of the way as we continue to try and make His victory ours . . .

And so Jesus’ calls us to renew ourselves in being the loyal, die-hard fans we were in the days that things were going better for us. How do we do that? Not by pretending bad things aren’t happening to us. Not by putting a fake smile on our faces when all we want to do is cry. Jesus gives us practical, everyday ways to remain faithful, to remain loyal – we see the hungry person and we give them food – we see the stranger and we welcome him – we clothe the naked, care for the ill, visit the imprisoned or shut-in.

When we love the other more than ourselves, we begin to reveal what die hard fans, no, what true disciples we are. Because, it is when our hearts are turned outwards, towards a world broken and needy, that Jesus’ love, Jesus’ victory spreads to those who don’t believe there’s any Hope. To those who feel defeated. To those who feel dejected.

When we love – like He loves – then Jesus’ Kingdom becomes a reality.

Our game clocks might still be ticking – and for each of us, the scoreboard might be reading a different score. But unlike so many other players out there, we have the unusual advantage – the mixed blessing – of knowing the final result, of knowing which side will ultimately ‘win.’ Mindful of that, and mindful of Christ’s care and concern for us, on this feast day especially let’s recommit ourselves to our fellow teamates – and to our loving and victorious King.