Latest News
Home /Blog/LEARNING SOMETHING FROM MICHAEL PHELPS (nope, not about swimming) 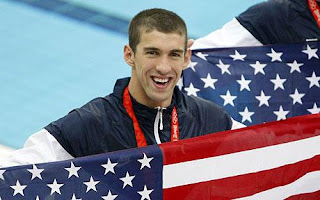 Homily:
If you had asked me who Michael Phelps was back in April or May I probably wouldn’t have been able to tell you anything about the guy. But since the conclusion of the 2008 Summer Olympics, I doubt there’s anyone who doesn’t know who he is.

Phelps has had more press and media attention- which is well deserved – since this summer when he became the first person to win 8 Gold medals at one Olympics competition all for swimming events. In the process, he set 7 new world records while the other one was only (only!) setting a new Olympic record. The New York Times made the observation that if Michael Phelps had been a country of his own – the “republic of Michael Phelps” would have come in 4th for the total number of Gold Medals that a country would have won (after China, the US and Germany) and would have 14 other countries behind him. That’s sick when you think about it. Phelps himself won more medals than 14 other countries.

Despite a nagging thought in the back of my head that he must be part-Dolphin in order to achieve such swimming feats, and in response to more serious cynics who wondered whether he was on any performance enhancing drugs (thank you Jason Giambi, Roger Clemens, and Marion Jones for that) he joined a group called Project Believe where athletes volunteer to be tested for steroids or supplements and all 9 times he was tested, Phelps passed.

So how does this guy get into the condition he needs to in order to be such a phenomenon? He’s been training since he was 11 years old. At that young age, his coach pushed him to swim 50 miles a week. A year later, his coach told him that if he really wanted to achieve his Olympic potential, he needed to abandon every other sport – he could no longer play baseball, soccer or lacrosse and instead he had to invest all his energy in swimming. So that’s what he did. At that young age he gave up all the other sports he was playing and zeroed in on swimming. In recent years, he’s explained what his training schedule is like. Phelps trains about 5 hours a day, 7 days a week. The intensity of these workouts is so severe, that Phelps has said at the end of the day, all he really has energy to do is eat (which he does a lot of, consuming close to 12,000 calories a day in order to maintain his top-notch shape), sleep and maybe watch a little television. He trains everyday – Sundays, holidays, his birthday, Christmas, Easter, Super Bowl Sunday. To put it mildly, Phelps has become this elite athlete because of his single mindedness, his focus, his dedication to swimming.

We kind of sit back and wonder about people like that, don’t we? How is someone able to do something like that? How are they that disciplined, that dedicated – or for that matter, that interested in a singular goal like swimming. He’s put vacations, relationships, schooling on hold because of his belief that this is a once-in a lifetime opportunity that he has right now. And with his goal achieved of becoming “the greatest Olympian ever,” people are still amazed, still shocked.

Today, we’re confronted by a feat that we might think as inconceivable to reach or as difficult to achieve as winning 8 Gold medals. The bible tells us a lot of different things in terms of how we should act and how we shouldn’t. In today’s Gospel, this young man asks Jesus – break it down for me, what’s the most important. Jesus basically gives us the cliff notes version of the entire Old Testament when he says: Love the Lord your God with all your heart, with all your soul, with all your mind . . . Love your neighbor as yourself. Oh, that’s it?
Those words seem to roll off pretty easy, but the radicalness of them, the incredible expectations they place are right there too. I’m sure for many (all?) of us, we wonder, how is that possible?

We immediately think of all the things that demand our attention and affection – our families, our school/work… There’s no shortage to the many things we have to do. And now we’re being asked to be so radically single-minded, so focused, so dedicated to God alone? We kind of think that’s something people like Mother Teresa or the Pope would be able to do, not us.

But God isn’t asking all of us to be Mother Teresa, or the Pope. He might be calling some of us to dramatic service as a priest or a religious. But that’s a different issue. He wants all of us to live vibrant lives – the lives he created us to live. Lives that are single-minded and focused in our love of Him. That doesn’t mean quitting work, skipping class, abandoning all of your relationships and spending all day in a church. It means loving God, finding God in our neighbor in all the encounters, the exchanges, the places our lives take us each and every day.

So, you’re a parent, you’re kids are annoying you, your spouse is aggravating you – you feel unappreciated, unnoticed.

Or, you’re a student – you’ve got roommates, classmates, professors, advisors. It seems everyone is putting yet another demand, another deadline, another expectation on you.

If we can look at all these typical, daily experiences, these daily struggles, these daily stresses and turn it around and say that we are doing it for God, through God and with God and in God – and if we genuinely want to love Him and love each other more in those situations, we not only fulfill His command, but we start to find unexpected joy and deeper meaning in areas that used to seem boring and tedious before. The monotonous becomes life-giving – and life changing – we start to see that God is an active, present part of our lives, not simply in this hour that we gather for Mass once a week but the other 167 as well.

That sounds more challenging than we’re used to, doesn’t it? And often we handicap ourselves by having an all-or-nothing approach to spirituality that says if we can’t do this perfectly, if we can’t “win the gold” in the loving God/loving neighbor department, then what’s the point, what’s the use?

That’s when the Lord who asks us to love Him so radically reveals to us the depth of His love for us. God can ask us to love Him with such single-minded, dedicated focus because that’s His nature; that’s how He loves us. And so He rejoices right here, right now if one of our hearts is moved, if one of our souls is touched, if one of our minds is changed to see His presence in our lives. God is everywhere, God is calling us, God is giving us the gift of Himself, and challenges us to do the same – to empty ourselves in love to Him, and in service to our neighbor – and only then will we see the fruit, find the fulfillment and achieve the ultimate prize that is Christ Jesus. God’s inescapable love is calling us, now.No God won’t be awarding any Gold medals to us (today/tonight), but He is looking for our dedication, for our single-minded – no, more than that – for our single-hearted Love.